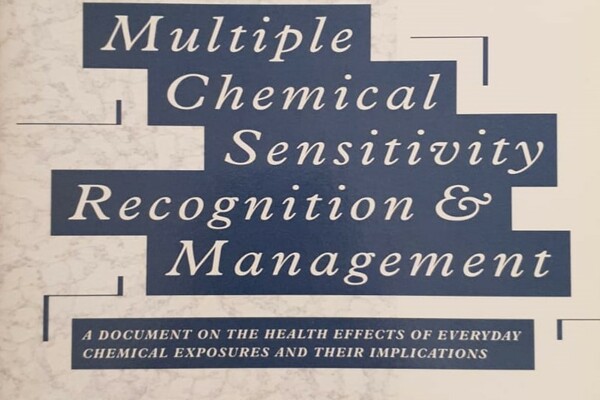 Production and use of synthetic chemicals have accelerated in the last 50 years. Relatively few have been tested for toxicity to humankind.
Resources Society publications Multiple Chemical Sensitivity

A report moderated by KK Eaton and HM Anthony

There has been an enormous increase in the production and use of synthetic chemicals and in exposure to pollutants, which has accelerated in the last 50 years. Five million different chemicals are now recognised, and relatively few of the chemicals in use have been adequately tested for toxicity to humankind or the environment.

Long-term ill effects have been reported from chronic exposure to heavy metals and pollutant chemicals. Most individuals report that their late symptoms are exacerbated by ambient exposures to volatile organic chemicals (VOCs) emitted by everyday products (for instance, perfumes, washing powders and cigarette smoke), which were previously tolerated without trouble and indeed often enjoyed. This condition is referred to as multiple chemical sensitivity (MCS).

The genuine nature of MCS has been recognized by officially commissioned reports from independent scientists in the USA and the UK, who have concluded that it is a valid diagnosis and a sometimes disabling condition, although all have stressed the need for further research.

Because of their biological roles, it has been suggested that pesticides (designed to interfere with enzymes) and hormone mimics may have a particular place in inducing MCS.

Patients with MCS are often treated as if their symptoms are psychologically caused. There is no good evidence for this. On the other hand, double-blind challenges have provided positive evidence for the provocation of symptoms by certain chemicals (varying in different patients) at levels too low to be recognised by the patient; challenge has been reported to cause changes in brain activity on SPECT scans. These patients are usually found, on investigation, to be suffering also from the effects of ‘hidden’ allergy (intolerance) to a number of different foods and food additives.

The scale of chemical contamination Is there an unrecognized problem?

Has chemical exposure contributed to the increased prevalence of allergies and related illnesses?