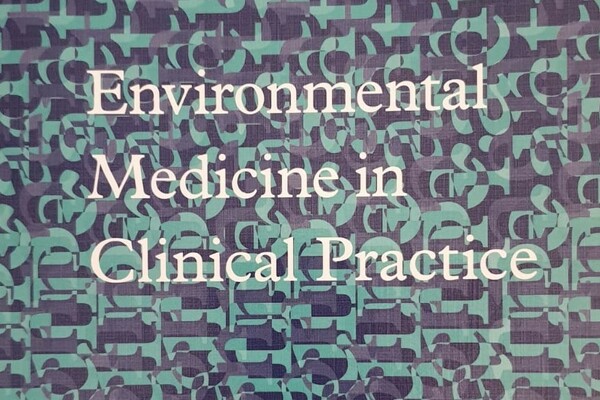 An important book, central to the practice of medicine in the 21st century.
Resources Society publications Environmental Medicine in Clinical Practice

Order a copy of Environmental Medicine in Clinical Practice here

This is an important book on a subject that will be central to the practice of medicine in the 21st century but which has been without a textbook until recently. Comprehensively referenced, it is an excellent guide to the published literature.

Environmental Medicine is the application of medical detective work to the management of chronic illness. If one can find the causes of symptoms, patients can often keep themselves well. The book gives practical instructions of how to apply these insights, which represent the management of choice for a wide range of common illnesses and usually result not only in relief of symptoms without drugs or surgery but also in a positive feeling of wellbeing.

The book includes useful appendices with information sheets for patients about how to do elimination diets and how to reduce exposures to environmental allergens and chemical pollutants, with clinical charts for recording progress and findings, and lists of useful addresses.

The marked increase in chronic conditions is imposing a great strain on GPs and on hospital outpatient clinics. More and more patients are needing help because they suffer from asthma, rhinitis, eczema and other allergies or from IBS, migraine and mood changes. Sometimes the same patients come back again and again with a variety of complaints and are thought to be somaticising. Children suffer increasingly from asthma, eczema, colic, migraine, hyperactivity and glue ear.

Although these conditions are often provoked by environmental and food factors or by deficiency of micronutrients, the relationship is usually hidden. This new text shows how to expose the causes and find out what provokes the symptoms so that the patient can avoid them and become symptom-free. Most patients are happy to co-operate and delighted when they start to feel really well for the first time for years. After that you rarely see them.

Patients need to be shown how to look for the provoking factors, and how to interpret their findings, but they do most of the detective work themselves. Attention to nutrition may also be needed for best results. With the help of this new text, practice nurses can do much of the explanation and guidance.

There is increasing interest in this approach from the medical profession and the general public, and this book will be a valuable resource for all who treat patients with chronic and recurrent illness. The book examines the evidence that it works, and gives clear instructions on how to start practising in this way. The appendices include 62 pages of invaluable instructions and diet sheets for patients.

Honor Anthony, Sybil Birtwistle, Keith Eaton and Jonathan Maberly were all doctors with conventional backgrounds, who found the methods of environmental medicine superior whenever they were applicable. They have, between them, worked as hospital physicians and in general practice, private practice and research, and in the first purpose-built environmentally controlled unit anywhere in the world. They use drug therapy when necessary but prefer to practise in the way described in the book.

Between them they have published many papers and have a total of nearly 70 years’ experience of this type of practice, which they see as being in the true mainstream of medicine.

The following review by the late Dr David Freed was published in The Lancet, volume 351 issue 9097, pages 221-2. Note that the name of the BSEM, at the time the article was written, was the BSAENM.

Since the late 1970s British and American allergists have been divided into two warring camps, each ascribing to the other stupidity, cupidity, or worse. Prof John Soothill once described the battle as “the blimps versus the nuts”. Each group is represented in the UK by a learned society and a peer-reviewed journal, and each would like you to think that it represents the true voice of authentic “scientific” allergology.

In the blue corner, representing the “blimps”, and supported by a veritable bombast of professors and Royal Colleges, we find the British Society for Allergy and Clinical Immunology (BSACI). In the pink corner, appearing for the “nuts”, with fewer professors but fairly pawing the ground in eagerness, appears the British Society for Allergy, Environmental and Nutritional Medicine (BSAENM). The second group used to describe themselves as “clinical ecologists”, which I think was a better description since it clarified their brief; they are as much concerned with toxicity as with immunology. Environmental Medicine in Clinical Practice is the acceptable face of clinical ecology, and contains a lot more hard science than you might expect.

As a career immunologist/allergist, I had watched bemused as the first clinical ecologists, led in the UK by Richard Mackarness, started to catch the media limelight with their tales of miracle cures in migraine and depression after simple dietary eliminations. Food intolerance is nothing new, and apart from the range of conditions being treated, I wondered what was so newsworthy and why these upstarts were stealing our thunder. Clinical ecologists, as far as I could see, knew nothing about immunology, had never heard of us, and seemed to think that they had discovered allergy for themselves. And what about desensitisation?

We knew about injection therapy for pollen allergy, and we knew that skin-testing with protein allergens can sometimes provoke systemic symptoms. But the clinical ecologists were trying to tell us that if you injected exactly the right dose of allergen, you could also switch symptoms off! Sometimes within minutes! They called it “neutralisation”. Obvious poppycock; these people were clearly mad.

I had to start changing my tune when in 1978 The Lancet published the first report, by Finn and Cohen, of double-blind food-challenge studies. These and subsequent reports proved beyond doubt that specific food intolerance can indeed cause quite unexpected symptoms. But “neutralisation” was something else, and I remained an implacable sceptic until I read W J Rea’s paper (Arch Otolaryngol 1984; 110: 248-52) reporting a double-blind trial of this treatment. I had met Rea and respected him, and the study he reported was watertight. This paper, I thought, could mean only two possible things. Either Rea is lying, or neutralisation works. Soon other double-blind trials were published and I started trying the new, incredible method. For diagnosing allergies it was pretty useless, but used as a treatment method it doubled my ability to change ill people into well people. But few others joined me in crossing the floor. Conventional allergists, by and large, drew up in battle formation to discredit us, and were joined by one or two psychiatrists.

Why psychiatrists? Because we clinical ecologists invade their territory. Not that we aspire to take over the major psychoses, but we do have observations about the many medically unexplained symptoms that tend to be labelled as somatisation or hypochondria. Environmental Medicine in Clinical Practice gives a list of symptoms and syndromes that have been reliably provoked by double-blind challenge with specific foods. It includes nausea, lethargy, irritability, headaches, enuresis, and numerous other “medically unexplained” conditions. Less compellingly, but still strikingly, chapter 16 lists symptoms that frequently resolve as soon as nutrition is optimised and intolerances and allergies controlled; it includes aggressive and unreasonable behaviours, bulimia, anorexia, irritability, and mood swings. I describe these as less compelling because the challenges reported were not double-blind, but the parents, teachers, and in some cases police officers involved in caring for these patients have no doubts.

What else do the two camps disagree about? Food addiction, gut dysbiosis (the “candida hypothesis”), novel methods of desensitisation, the dangers of ambient chemical pollutants and of pharmacotherapy, the importance of micronutrients, and the causes of hyperactivity. This book adduces evidence for all its views, much of it unashamedly based on the oldest clinical science of all, watching patients. The balance of the book is uncontroversial; allergists of either denomination could have written the chapters on aeroallergens, mechanisms, pollution, and economic aspects, showing that despite the differences, there is also much agreement between the two camps.

Any niggles about the book? Well, I don’t like the terms “masked allergy” and “Type B Allergy”. The first is used to describe the addiction-like state in which the damaging substance makes the sufferer feel better for a while, and the second for intolerance states mediated by unknown pathways. Both conditions exist, often together, but these names generate more heat than light.

That said, the book is timely, well written, well argued, well referenced, attractive, and cheap. The official line put out by traditionalists that “there is no evidence” for clinical ecology will not do; there is evidence, and these authors have presented it.