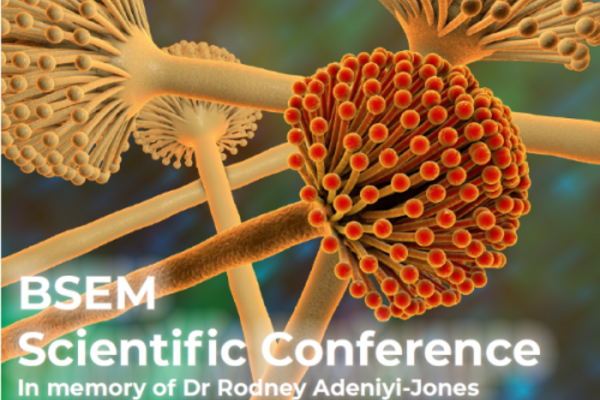 at the Cavendish Conference Centre, London on 24th June 2022

At last, a BSEM conference, the first since 5G in September 2019.  It was not without problems. It had to be postponed because of Covid. And then we had a train strike. This meant I had to watch it virtually, the first time for a major conference.

In the introduction it was pointed out that mycotoxin disease is underdiagnosed in both respiratory disease and in neuro-psychiatric disease and to think about fungi in every sick patient. I take that to mean nearly everyone we see.

The conference was dedicated to Dr Rodney Adeninyi-Jones who died in May 2020. He came from a medical family and was a long-standing member of BSEM. He had a full and varied life and we heard many interesting facts about him and listened to some of his favourite music. He was best known for chelation therapy. He will be sadly missed.

The first talk was by Professor David Denning on aspergillosis.

I found out there are three major ways aspergillus can manifest. The first discussed was invasive aspergillosis. He pointed out that more people die of pulmonary aspergillosis than from TB or malaria. However, usually they had serious underlying disease. What may surprise many is that it was a common complication of severe covid 19 and significantly increased mortality from this disease.

He told us 4% of admissions for exacerbations of COPD are due to invasive aspergillosis and 40% die from this.

Another form of aspergillosis is chronic pulmonary aspergillosis. It can mimic TB (although cavities are more irregular) and is often confused with it High volume culture and PCR are more sensitive than standard culture. For chronic aspergillosis there was an 80% mortality at 5 years

Another form is allergic aspergillosis. About 2% of asthmatics (0.8-4%) have this but in severe asthma it is 10%.A clue was worsening during thunderstorms (pollen can also be high during thunderstorms). It is more likely if there is damp or mould in the environment, in occupational asthma, if sinus infections and if there were other fungal infections (athlete’s foot, fungal toenails, otitis externa). No surprise that there are often delays in diagnosis.

IgE for aspergillus can be a useful test as can testing for Cladosporium and Alternaria: the most common fungi involved. Total IgE is also a clue. IgG can be used but will not indicate if there is active infection. Sometimes IgEs can be in 1000s. Skin tests are also useful.

There was discussion of severe asthma. Trials have showed a variable success with anti-fungals and inhaled anti-fungals should be available soon. Bronchiectasis often due aspergillosis and may need 3-4 months of treatment. Drug interactions can be important with antifungals. A good source of information is www.fungaleducation.org.

After the break there was a talk by Prof KirsiVaali from Finland on dampness and mould hypersensitivity and from Dr Hyvonen also from Finland. There can be an overlap between mould exposure and sick building syndrome. Often the patient is very sensitive to smells.

There was an interesting discussion on iron. Patients with mould hypersensitivity often have low iron. Early work on rats has shown that there is a limit to the transport of iron by transferrin. If you give too much it gets stored as ferritin and can damage lipid cellular membranes with increased susceptibility to infections. So with iron, less is more. It was suggested the standard way iron is given (sometimes by infusion or orally up to three times daily) is too much. However, I am unclear if this has been confirmed in other studies.

An odd symptom of mould exposure can be pain behind eyeball.

We heard about a police station in Finland where half the patients developed multiple chemical sensitivity (MCS) due moulds in the building. A combination of toxic chemicals and mould is especially harmful. The commonest symptoms were fatigue and memory problems.

During questions there was discussion about whether magnesium carbonate would reduce the extracellular acidosis and one member of the audience explained her MCS only resolved when she used Asea (a special mineral water) but her son responded to cholestyramine.

In the afternoon there was a further talk by Prof Vaali on a new method screening for mould toxicity. She estimated 1 in 6 people in Finland were exposed to moulds. She explained there were relatively harmless moulds which are easily cultured (in 1-2 weeks) and are removed by using antifungal compounds (creosote, boron, arsenicals) in buildings. However, there were more toxic moulds which could survive low temperatures, did not respond to antifungals and were difficult and slow to culture (months). These caused immunosuppression and blocks GLUT-1. (In other words it is possible to culture the wrong mould while the real villain escapes detection.)

She described a method of diagnosing moulds from moisture in the air that they had developed in Finland.

Dr Pol De Saeedeleer gave an excellent talk on brain toxicity from chemical and moulds. He noted the brain had microglial cells which are like the macrophytes of the brain. Levels get higher in insomnia and can lead to cytokine production and neural damage.

However, if there is a leaky gut, LPS (lipopolysaccharidase) is produced causing inflammation and cognitive issues. LPS can be found on the outer wall of gram-negative bacteria and is an endotoxin and can pass the blood-brain barrier. Mycotoxins can cause neuropsychiatric toxicity either indirectly through LPS or directly.

He pointed out that moulds don’t hang about and will grow within 24 hours of water damage and produce large numbers of spores. 50% of buildings are damaged by water, leaving lots of possibilities for mycotoxins to do us harm.

I was interested to hear that mast cells can be activated by mycotoxins. These increase the permeability of the blood-brain barrier and mastocytosis is linked with autistic spectrum disorder.

He mentioned a study of 277 infants exposed to moulds. Unfortunately, moulds can damage brains and there was an IQ deficit of 10 if exposed more than 2 years.

MS has also been linked to mycotoxins. There was a discussion of motor neurone disease. A strange feature of this is it can occur in people who do lots of exercise and have a low BMIs. You would surely think these people would be sweating out toxins and be less susceptible. Something odd is going on here.

He noted that 4-cresol produced from clostridia will chelate magnesium, manganese, calcium and iron and disrupts manganese superoxidase that protects mitochondria. This can lead to oxidative stress, mitochondrial dysfunction and disrupts cytochrome P450 enzymes. This leads to poor detoxification and dopamine toxicity as it is broken down to toxic HVA. It also depletes glutathione which is essential for immunity and detoxification.

He told us that some things can help such as fulvic acid, taurine, and quercetin. He felt liposomal glutathione was essential. Taurine can also be helpful, perhaps because it competes with the glycine in glyphosphate.

Symptoms of mycotoxins exposure include fatigue, short-term memory loss, malaise, cognitive impairment, depression and inability to walk in a straight line with eyes closed. Unfortunately these are not very specific.

During question time it was mentioned appendicectomy doubled the risk of Parkinson’s disease. There was a suggestion the PANDAS could be caused by mycotoxins (as well as streptococci). There was a recommendation of Luteolin for sleep from Rachel Nicol and she said it was the only thing that helped her. There was a discussion on the effect of EMFs on mast cells as they alter cell membranes and help moulds grow.

I heard that clostridia could produce fructose (as if we haven’t got enough) and that gypsum today is contaminated by aspergillus as is concrete. This may be because it comes from power plant waste. I would expect it contains many other nasty substances as well if this is the case. Chemicals and moulds are a bad mix. In the past, lime was used which kills moulds.

Finally, I heard that aluminium could be a partner in crime with glyphosphate when it came to brain damage. This is a combination best avoided.

I learned that in the UK CISCO is a company that will do mould samples fairly cheaply.

The final talk of the day was by Rachel Nicol and outlined her own experiences with mycotoxins. It was an extraordinary story which illustrated the problems of moulds brilliantly with lots of practical tips.

Initially she had developed severe headaches, marked insomnia, emotional volatility, frequency, and weight gain. Mainstream medicine was unable to help her, and she was eventually diagnosed with multiple chemical sensitivity (MCS) and given neutralising injections at the Breakspear hospital This got rid of nearly all the symptoms apart from the weight gain.

She then was suspected of having mast cell activation. She was then investigated by an endocrinologist. He found high insulin levels and volatile changes in glucose unrelated to food intake. He was puzzled.

A further clue came when she had the organic acid test which showed fungal metabolites in her urine and a mycotoxin test which showed high levels of mycophenolate and ochratoxin A - both mitochondrial toxins. She was also positive on a visual contrast test (this is available on Shoemaker website). This is non-specific but indicates neural inflammation.

She contacted a forensic surveyor (www, buildingforensics.co.uk) and he found a mould infection from a leaky seal which could not be seen with the naked eye. This was treated and her symptoms improved. She was able to bring her weight down by fasting.

Unfortunately, her symptoms recurred. Her weight went up even while fasting which she thought was metabolically impossible but still happened. A further inspection pointed out that she was getting a constant supply of mould from the air as she lived by a river. By this time she knew moulds could hypersensitise her to chemicals and therefore make MCS worse. She used a complex combination of supplements. Houses by the river and mould sensitivity are not a good combination. She moved house.

Being a medical researcher, she eventually realised the cause of her strange weight gain. She was getting leptin resistance due to mycotoxins stored in fat cells. The body mistakes these for triglycerides in the fat cells and assumes that fat needs to be stored, hence the weight gain. She also had low melanocyte-stimulating hormone (MSH) which is typical of mycotoxin exposure and raised ADH (hence frequency). It was a horrenously complex case with many useful lessons. A useful tip was vitamin B2 (riboflavin) is needed to recycle glutathione.